When a group of people is repeatedly told they were born unequal, they forget how to frame demands for rights. This is in contrast to Christianity, which prompted the genesis of equal societies.

By Kancha Ilaiah Shepherd
On December 26, the India Today TV (English) channel telecast an investigative report on the status of Dalits in Hindu temples. Its investigation report revealed that many major Hindu temples either do not allow entry to Dalits, or perform ‘shuddhikaran’ (washing the temples with milk and water) after they leave. In a panel discussion, of which I too was a part, the Rashtriya Swayamsevak Sangh (RSS) and Bharatiya Janata Party (BJP) representatives disagreed with the practice — but were not willing to suggest any reform agenda.

Their children cannot study in any Hindu theological school. Such schools are exclusively meant for Brahmins. In other words, the Shudra/Dalits are defined as ‘Hindu’ in terms of religion — but have no spiritual citizenship rights.

If people and communities are in a religion, but do not have spiritual citizenship rights, what implications would it have on their rights in other structures — social, political and economic? 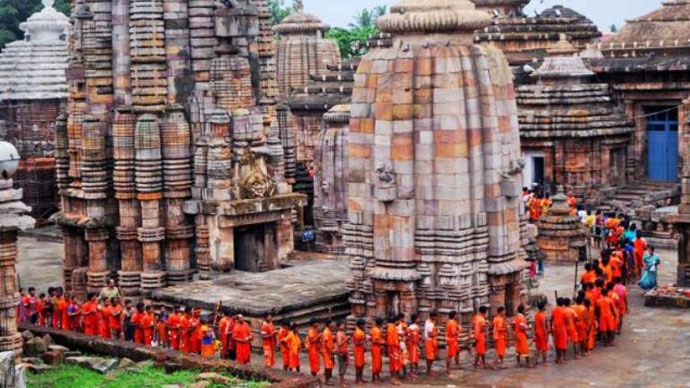 At Odisha’s iconic Lingaraj temple, Dalits are allowed inside the sanctum only once in a year. (Image: nuaodisha)

To understand what spiritual citizenship actually means, we need to examine its nature and character.

The concept of political citizenship is well-known in the scholarly domain. That a citizen has equal rights with every other citizen in a democratic set-up is also now well-known. The basic concept of ‘rights’ starts with the right to vote, the right to contest and the right to occupy all positions in the state.

The right to vote was traditionally in operation in tribal communities, with a voice vote. The tribal democratic republics actually institutionalised the concept of citizenship in a rudimentary way. The notion of God and religion was not well-developed at that stage of human evolution.

But the concept of citizenship, in its meaningful sense of rights, is operative only in democratic systems.

In political dictatorships and authoritarian regimes, including communist regimes, the concept of ‘citizenship’, with a sense of equality even in the political domain, is not in operation. In communist systems, though equality is the main political principle, since the right to vote and the right to contest are not available, the principle of equality is circumcised by manipulation. How other domains like religion operate in the communist systems is not very clear. How civil society operates needs to be scrutinised.

However, the major Communist Party-controlled country, China, has shown better economic progress than India, which is democratic in the political domain — but its spiritual system suffers from faith-based spiritual fascist hierarchies.

Human untouchability is an accepted and practised practice in Hinduism.

Our concern here is to look into the spiritual citizenship issue, which has serious implications for the huge number of Indians categorised as Shudras or Dalits or Adivasis.

In the long history of Hinduism, the Shudras and Dalits had no spiritual citizenship. The Shudras became slaves of Brahmins, Kshatriyas and Vaisyas from the Rig Veda days. They were the Indo-Africans who built the Harappan urban civilization, by advancing the villages. The Dalits/Adivasis were part of that evolution.

In the 21st century, the question of about 800 million people not having the right to a spiritual citizenship will have huge implications for national development — and its competitive energy with neighbouring nations like China and Pakistan. 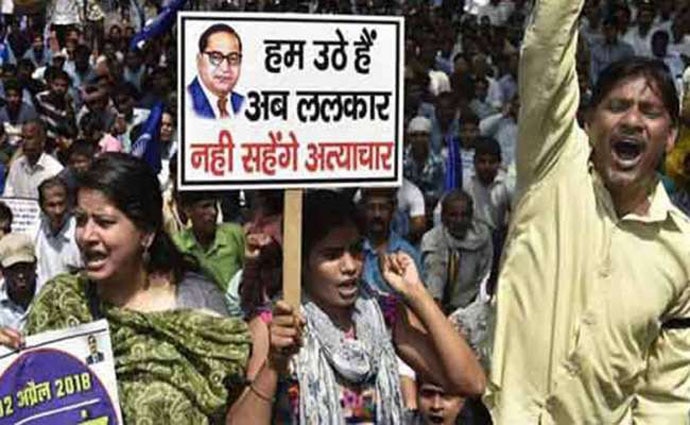 In the 21st century, about 800 million people — who have political rights — are still struggling for social and religious rights in India. (Photo: PTI/file)

Earlier, India as a nation was enslaved by colonial expansionists, and even before that, by other invaders who were better organised by their spiritual systems.

However, one fundamental question that confronts us in this discourse is, where did the notion of citizenship come from? Whether the notion of citizenship has its origin in the domain of religion or in civil society outside religious society has not been seriously examined. As I said earlier, the tribal societies instituted some sort of civil societal citizenship. But there was no developed religion in those societies.

In pre-democratic political society, apart from religion, there was no well-organised structure of non-religious civil society. Since the citizenship question is related to the notion of equality, I do not think that general civil society in itself could evolve a notion of equality. For a long time in human history, ‘might was right’ — both organised religion and the state changed this course, and improved conditions of human safety. Between the state and religion, religion played a role of mental control and institutionalised behavioural patterns.

The notion of a higher level of human equality seems to have had its origins in the religious domain itself.

There is a clear indication that the concept of citizenship has its roots in the gradual evolution of religious understanding that ‘God created all human beings equal’.

Thus, the notion of equality seems to have taken birth in the religious domain. I do not think this idea of ‘God creating all human beings equal’ has been there throughout the existence of the institution of religion. It is certainly an evolutionary idea.

It seems to have become somewhat clear with the evolution of codified text-based religion. Religion with a codified canon first came into being perhaps with the complete codification of the Bible in the post-Jesus period of the world. Though Buddhism as a religion is pre-Christian, it never evolved a codified Buddhist canonical text.

The Bible has given the idea of human equality with statements such as Genesis’ ‘God created male and female in the image of God’. Perhaps a new thinking must have begun in the minds of humans about the notion of equality based on this statement.

It is written: “So God created man in his own image, in the image of God he created him; male and female he created them. And God blessed them…”. The repeated reading of such a notion of somewhat equal creation must have led to interpretations of ‘equal creation of all human beings’.

In other words, this statement in the Bible paved a new path for human equality.

This canonical text became a reference point of demanding equality among educated members of the religion by constantly invoking the idea that God created all human beings equal.

All human perceptions of inequality started with the perception that man and woman are unequal. The other inequalities, like caste and race, evolved gradually. This perception of human beings needed to be changed. The only available powerful institution was religion. And the change of perception was initiated by the Bible as religious text.

The other major statement that the Bible put before human beings was that, “There is neither Jew nor Greek, there is neither slave nor free, there is no male and female, for you are all one in Christ Jesus” (Galatians 3:28 ). This statement established a principle that race, nationalility and male-female inequalities do not make any sense in the image of Jesus. In other words, equality is an essential principle of the divine domain.

Though this is not fully achieved in practising Christianity, the principle does give scope for the struggle for equality.

The question now is — does Hinduism as a religion show respect for spiritual citizenship in any form?

Did Hindu religious texts (as there are many texts) give any scope for spiritual equality?

Do organisations like the RSS or the Hindu Mahasabha work towards that kind of spiritual equality? 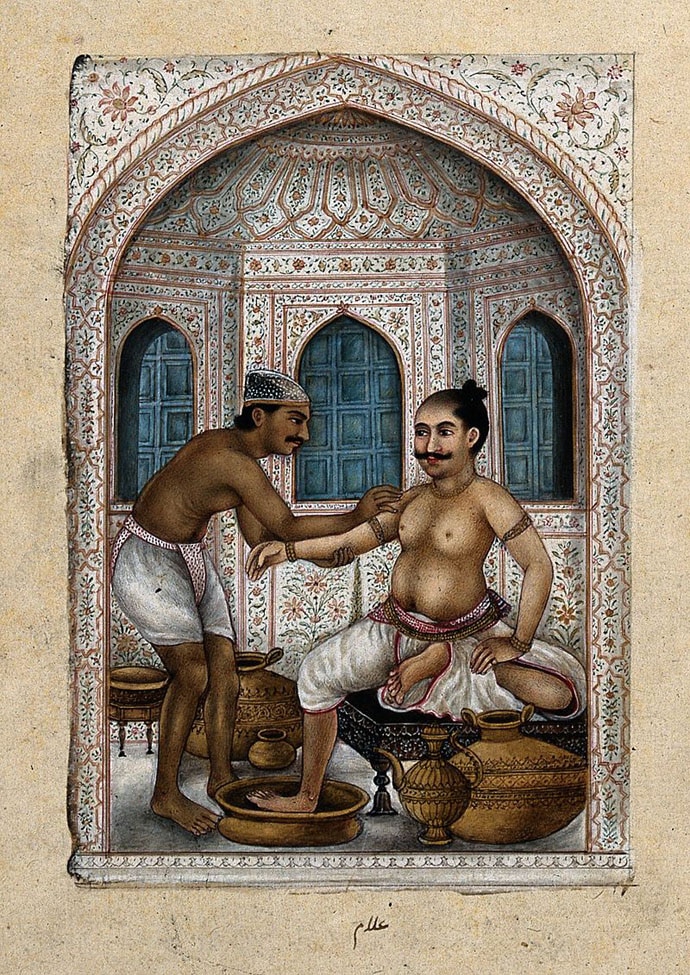 The Shudras were slaves in ancient India — they have been people without any spiritual rights since then. (Photo: Wikimedia Commons)

In terms of canonical ideology, the Rig Vedic text clearly laid down that God (the Purush or Brahma) created human beings unequal, as four Varnas — Brahmin, Kshatriya, Vaisya and Shudra. Even in the most revered Hindu spiritual text, the Bhagvad Gita, the statement ‘Chaturnam Mayamshustam’ (I have created four Varnas as unequal) clearly indicates that all Hindus are not equal.

The two middle Varnas, Kshatriyas and Vaisyas, have been given several rights.

But the Shudras/Dalits have not been given any right.

The Shudras were slaves in ancient India — they have been people without any spiritual rights under the hegemonic control of Brahmins since those days.

The same situation continues till today.

Why do not they ask for spiritual citizenship?

Protracted spiritual slavery — with a mandate that God created an individual or group unequal and that status could never be changed — conditions human mindz in a frozen manner. It was repeatedly told to the Shudras/Dalits generation after generation that ‘God created you in this fixed place, that is your Karma’. In that state of mind, most human beings fear God more than they fear the state. This is where belief and faith work as strong doses towards a mental condition.

Shudras/Dalits have suffered these conditions for a longer period in history than any other set of people in the world.

Asking for spiritual equality is a fundamental issue before the Shudra-OBCs and Dalits. Their philosophical growth depends on this issue getting resolved.

← Why Pinarayi Vijayan must take the RSS-BJP head-on in the Sabarimala fight
Sabarimala row: While he defends ‘tradition’, will PM Modi also guarantee protection to Bindu and Kanakadurga? →