The outcome of 2019 Lok Sabha elections depends on the Shudra realisation of their spiritual and socio-political status in the ‘RSS Hindutva realm’.

Dev Raj Chanana in his book, Slavery in Ancient India, proves that the Shudra varna was nothing but the Dasa varna, which means slaves.

The Shudras historically evolved from slavery to broken peasantry by medieval times. This further led to division of that varna into many sub-castes. However, the Shudras were/are the main producers of food in India then and now.

For a long time they had no socio-spiritual relations with the Brahmin priest as the Brahmin was not even ready to touch the Shudras. By medieval times, the Shudras had their own spiritual agrarian God/Goddess figures.

There was no link between the Shudra spiritual system and the Vedic spiritual system. Since Brahmins were recognised as bhu devatas by the rulers, any Shudra attempt to become literate was curbed violently, as Brahminism was against Shudra education. Brahmins constituted a small minority at all times. Their physical strength was drawn from the Kshatriya rulers. Although the foot soldiers were Shudras, the commanders were always Kshatriyas. Hence, any rebellion by them was easily crushed.

After the Gupta (Vysya) dynasty established its rule in the 5th century AD, the Banias got the sole business rights and the Brahmin priests and the Banias made that rule acceptable to all.

We must understand Prime Minister Narendra Modi’s position of power in this background.

Although he has an Other Backward Class certificate, the Banias of India — particularly the big business owners — think that after the Gupta dynasty, they got all powers in their hands.

Amit Shah, a non-reserved category Bania, is the real connection between the Bania business and the entire political set-up.

Hence, in the 2019 Lok Sabha elections, the big businesses will play a much bigger role than what they did in 2014 to bring Modi back to power.

However, the election outcome depends on the Shudra realisation of their spiritual and socio-political status in the RSS Hindutva realm. After the 2014 elections, the Shudras of North India lost whatever regional political power they had earlier.

The Bania business and industrial houses have been playing a key role in Indian politics after 2014 elections.

Modi and Amit Shah have no choice but to obey their rule as ‘natural’ leaders of that community.

Historically, the Bania ‘business success’ is infamous for its ‘extractionist’ policies. The priest and king in the medieval times were happy with that kind of business since the shahukar fed the priest, the temple as well as the state treasury with such immorally earned money.

The Brahmin, Bania and Kshatriya unity connected by a common Janeu (sacred thread), the right to education for all three castes (varnas in Vedic language) got stabilised by the time the Muslim rule got established. The big businesses will play a much bigger role than what they did in 2014 to bring Modi back to power. (Credit: PTI photo)

The ‘Janeu’ is a citizenship marker for the Hindu for spiritual, social and political engagement.

If a Shudra became a king by physical force, the priestly class offered him Kshatriya-hood and separated him from his Shudra lineage.

The king’s children thereafter got the right ‘Janeu’, education and political rule. That family’s citizenship rights were guaranteed and the Brahmin priest would serve him with all respect.

The right to religious citizenship is more important than political citizenship in India because it has more impact on the human behaviour. The Shudras of India do not have that spiritual right in Hinduism even now, ever since the Rig Veda was written.

In North India, castes like the Jats, Yadavs (though they are called people of Srikrishna heritage) Gujjars, Patels, Marthas to Dhobis and Nayees were considered to be Shudras who are physically touchable, but spiritually untouchable in Varnadharma Hinduism of modern times.

Their right to enter temples could be termed as post-Muslim rule achievements. The so-called Bhakti movement was Muslim era concession in which Shudras were given some spiritual status in order to checkmate conversion of Shudras into Islam. But even then the Shudras were not given the spiritual citizenship as that would destabilise the Varna order in a big way. The RSS skillfully shifted the political debate from Mandal and caste to religion with Mandir politics. (Credit: India Today)

KB Hedgewar and MS Golwalkar were very particular about protecting that Varnadharma in a ‘Hindu Rastra’.

The Muslim rulers respected and safeguarded the Varnadharma order because the spiritual unity among all non-Muslims would have caused a political crisis. Muslim scholars did not write a single book on caste system at any point of time in history because they were scared of the Brahmin wrath.

Until 1915, the year in which the All India Hindu Mahasabha was established, there was no political institution to organise Hindus outside temples and the Peethas that Adishankara had established.

The All India Hindu Mahasabha was established under a Brahmin leadership with Bania finance while the Kshatriyas worked with it as integral Hindu citizens.

The Shudras were mobilised around it without giving any spiritual citizenship rights.

But the real political mass structure to organise the much bigger Shudra mass into the Hindu fold by highlighting the Muslim threat (not so much Christians as they did not want to invite the anger of British rulers) came into existence with the establishment of the Rashtriya Swayamsevak Sangh by Brahmin leaders  in 1925.

By then, the Brahmin Bania youth were going to English-medium schools. Sanskrit got disconnected from Brahmin families across India.

Hedgewar and Golwalkar were educated in English-medium colleges. The former was a doctor and later was a lecturer in the Banaras Hindu University.

In urban areas, the anti-Muslim agenda attracted lot of Shudra youths who could hardly go to schools and colleges.

The visible spiritual symbols of Islam like a beard without moustache, the skull cap and the invisible but religious circumcision were used as ‘anti-India markers’ to enthuse the Shudra youth.

But they were never allowed to become conscious of their own lack of Hindu marker — the Janeu. It was a highly skillful operation.

From 1915, the Hindu Mahasabha and from 1925, the RSS never asked for all Hindus getting equal rights in the Hindu religious system — the right to Janeu and the right to priesthood in mainstream temples.

On the contrary, the right to Janeu for Shudras (leave alone Dalits and Adivasis) was not even allowed to come up for discussion. The most important right to priesthood in the organised non-Shudra temples was also never discussed. 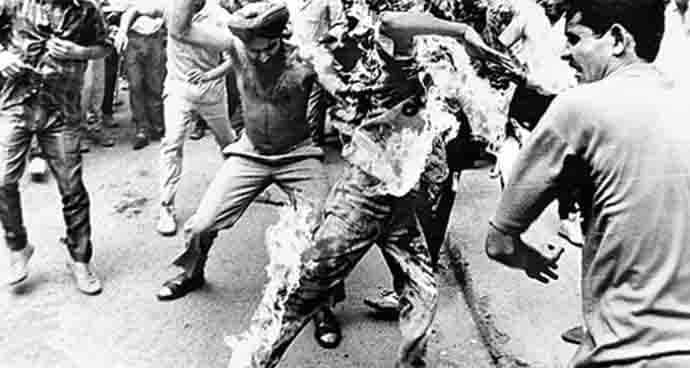 However, by 1990, the anti-Muslim and anti-Christian campaign became a massive issue. Thousands of Shudra youths got mobilised into the movement. By then, the Brahmin-Bania and Ksatriya youths were mostly in engineering, medicine and civil service training centres. Most of them were trained in private English-medium schools. The RSS and the Hindu Mahasabha never opposed their children going to English-medium schools and colleges.

But they were totally opposed to English-medium teaching in government schools across the country. It was a very intelligent strategy. That kept even the Shudra land-owning castes away by the time globalisation began.

Even today, there are very few English-speaking and writing individuals among them.

The RSS and the Hindu Mahasabha organised the anti-reservation movement which worked against the few educated Shudra youths in the colleges and universities in terms of securing jobs.

They also weaved the anti-Muslim campaign around the Ram Mandir with the Shudra youths also taking to the streets. Their anti-Mandal campaign mobilsed the Brahmin-Bania, Ksatriya (and the unreserved Shudra) youths who finally took to the streets. This was being done with a slogan of “Hindu Unity”. The Shudras did not realise their status till they started the recent reservation movement — for instance by the Jats, Gujjars, Patels and Marathas.

However, the Shudras as a whole did not understand the hidden strategy. Golwalkar made one thing very clear. In his book, We or Our Nationhood Defined, Golwalkar said the Hindu Rastra that we establish would see that “people of the world will come to Hindustan to learn their duties at the holy feet of the eldest born Brahamanas of this land”.

Amid such cultural beliefs of the RSS, where is the scope for liberation of Shudras?

← The Shudras Want Empowerment, Not a Giant Statue of Their Iron Man
RSS/BJP And The Shudra Neo-Slaves →