The stories of Patel, Gandhi and Nehru are parables of the status of Shudras, Banias and Brahmins in India.

Kancha Ilaiah Shepherd
Prime Minister Naredra Modi will unveil a statue of Vallabhbhai Patel – the tallest statue in the world – on October 31. This is happening at a time when the Patels, Jats, Gujjars, Marathas – the top layer of the north Indian Shudras, to which Patel belonged – are fighting to be categorised as Other Backward Classes to gain access to government reservations. If they succeed, the Shudras of India will unite in a single socio-political bracket, which can lead to a massive re-organisation of the country’s social relations. On this occasion, it is important to assess the status of Patel and the Shudras in the Hindu religion and the Indian socio-political system.

An assessment of Patel is best done via comparison with Mohandas Gandhi and Jawaharlal Nehru, the two main leaders he worked with during the freedom movement and, for some time, in independent India. The stories of Patel, Gandhi and Nehru are parables of the status of Shudras, Banias and Brahmins in India.

Patel was a Shudra from Gujarat, Gandhi a Bania from the same state, and Nehru a Brahmin with Kashmiri origins from what was then the United Provinces and is now Uttar Pradesh. Their status in the Hindu religion differed quite significantly. Patel had slave origins in the Vedic period, Gandhi had early trading (middle varna) origins and Nehru had priestly origins. Gandhi and Nehru had the right to wear the sacred thread, the janeu. Patel had no such right, just as the Shudras still don’t have that right today, even though they are considered to be Hindu.

Patel’s ancestors were tillers of the land, cattle grazers, harvesters of crops. They were also soldiers in the service of different rulers through various periods of history – the monarchical period, the Mughal period and the colonial period, because the Shudras had a duty to defend the village and nation. The work of defence and production fell to the Dalits too, even when they were treated as being untouchable.

Gandhi and Nehru’s ancestors never produced any goods – agriculture and physical labour were considered demeaning, Shudra domains. There are few examples of Banias or Brahmins being soldiers at any stage in history. Their vegetarianism and the notion of non-violence prohibited them from entering the army. But they depended on the Shudras’ work throughout their existence and the Shudras always served them.

Patel served Gandhi and Nehru in the same spirit. It was in this tradition that he became the “Iron Man” of the freedom struggle, whereas Gandhi became the “Mahatma” and Nehru the “Pandit.” Patel’s moniker,  was meant to be derogatory, a declaration, in the eyes of those who coined the term, of Shudra intellectual and spiritual inferiority.

Patel’s ancestors had no right to education till the British arrived in India. They never wrote about themselves and others did not write about them. Patel and his elder brother, Vithalbhai, were the first in his family to go to school. The tradition of Shudra illiteracy was broken in the region only during the 18th century. That was why Patel’s parents never recorded his real date of birth – his official date of birth, October 31, was invented for his school records. This is why Modi is inaugurating Patel’s statue on that day – because of the Brahminical oppression of Patel’s ancestors.

By the time of Patel’s birth, the Brahmins and Banias had already acquired advanced education in English. Gandhi and Nehru had their dates of birth properly recorded, and had well-documented family histories. They were not self-made men – they inherited status and privilege.

Patel was a self-made, “hard” man – his rise relied on his brute political strength. But he never had the luxury of evolving the “soft” power of intellect. He served a role similar to that of his ancestors and never broke beyond the position assigned to him in the Brahminical system of Hinduism. Blindly, he defended this system that oppressed him. This is the unfortunate legacy he left to the Shudras.

Today, Brahmins and Banias continue to dominate India’s politics, government and economy, and control the country. A big reason for their grip over all the structures of power is that they control the system of Hinduism that they impose upon the Shudras. The Shudras have no say in this religion that is supposed to be theirs. They have no right to be priests or to take the lead in interpreting scripture.

Also Read: Why the Statue of Unity Hasn’t Quite Generated the Euphoria BJP Craved

The Patels, Jats, Gujjars, Marathas and so on are fighting for reservations hoping that it will give them some space in the structures that they have been shut out of. They have thrown their support behind the Bharatiya Janata Party and it continues to pay lip service to Patel – Advani described Patel as “Abhinava” during his rath yatra before the demolition of the Babri Masjid. But under the BJP, the Shudras have become even more marginalised. The hegemony of Bania and Brahmin forces is visible everywhere in India even now.

The Rashtriya Swayamsevak Sangh, always headed by Brahmins, admires Patel because he did not disturb the varna order. He did not ask for priesthood for the Shudras; he did not ask to wear the sacred thread himself; he did not ask that Shudras get the same rights as Banias and Brahmins in all spheres. When Gandhi decided that the first prime minister of India should be a Brahmin (Nehru), Patel obediently resigned from his post as the president of the Congress and handed it over to Nehru. 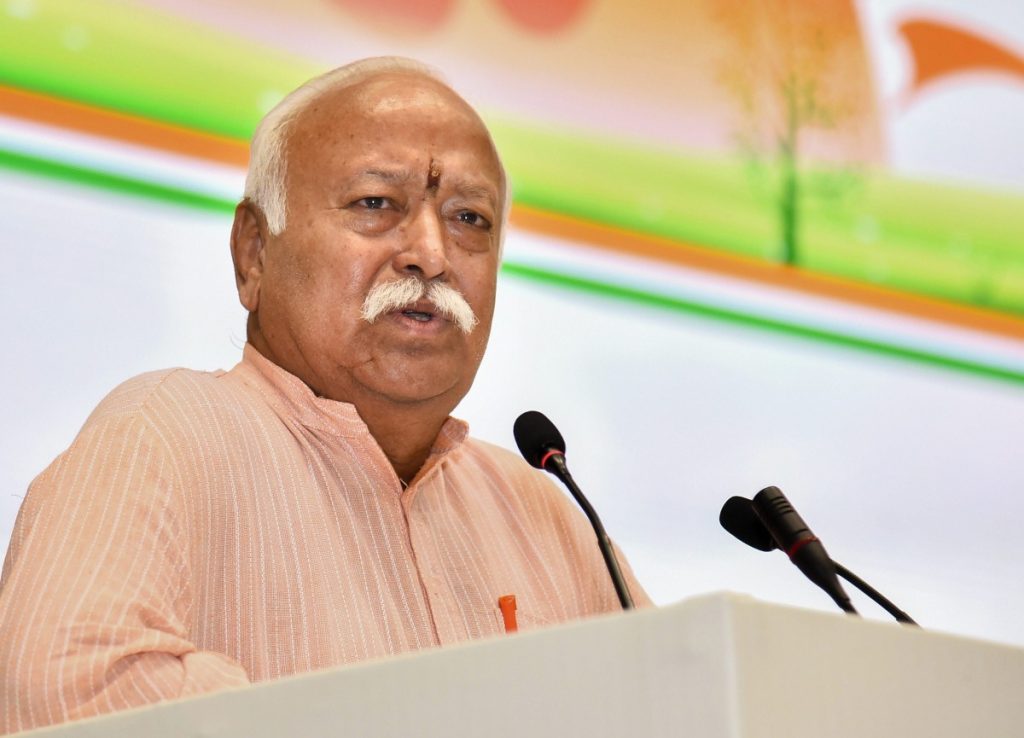 The Rashtriya Swayamsevak Sangh admires Patel because he did not disturb the varna order. RSS chief Mohan Bhagwat Credit: PTI

Gandhi and Nehru wrote their own histories, leaving behind careful autobiographies. But Patel did not do this. He must have thought that his family history and his own history were not worth writing. Gandhi and Nehra archived all their writing and correspondence. Patel, as one of his biographers notes, wrote all of his letters by hand and never preserved copies, and never kept copies of the letters he received either.

Today, Gandhi and Nehru are known as great thinkers and their works are studied in schools, colleges and universities. Patel is known as an “Iron Man”, without any books of his own about his life, his ideas, his family, his caste. We can only learn of him from the writings of others, and even those others rarely happen to be Shudras. It is easy now for the RSS and BJP to write whatever history they want for him.

Gandhi and Nehru wrote their own histories, leaving behind careful autobiographies. But Patel did not do this. He must have thought that his family history and his own history were not worth writing.

Patel’s self-erasure was an unfortunately typical Shudra characteristic. They have a rich tradition of oral history and story-telling, but due to the Brahminical prohibition on Shudra literacy, they never developed a culture of writing any of this down. In fact, no Shudra leader of the freedom movement wrote an autobiography. The Hindu religion, historically, wanted Shudras to be known as people of actions but not of ideas. Patel’s life operated in that Brahminical domain. None of his descendants, unlike Gandhi and Nehru’s, became writers or politicians. His Iron Man-ship ended with him. That is how it was meant to be.

Patel was claimed by the RSS early on, as he was seen as a close ally of the Hindu Mahasabha. As a Shudra, he did not feel the compulsion to seek any social and religious reform and so he became their man. The irony is that the RSS has championed this man but has never allowed a Shudra to become its sarsanghchalak. Except one Kshatriya – Rajendra Singh – all sarsanghchalaks have been Brahmins.

Had Patel written down his philosophy, his views on his family and community, their work ethic and spiritual culture, perhaps the whole Shudra community would have entered the national philosophical and political discourse. Gandhi and Nehru performed that service for the Banias and Brahmins, though they only needed to add to existing traditions, not establish completely new ones for their communities.

Unlike Patel, Ambedkar refused to accept his community’s unequal status under Hinduism and challenged the foundations of their spiritual and social oppression. Credit: Wikimedia Commons

What Patel failed to do for the Shudras, another man did for the Dalits against even greater odds. B.R. Ambedkar educated himself in political thought, philosophy, scripture and rhetoric, and took up the cause of socio-spiritual reform. Unlike Patel, he refused to accept his community’s unequal status under Hinduism, and challenged the foundations of their spiritual and social oppression.

Patel studied law, but did not show any interest in philosophical questions. Without that, he never gathered the tools to understand his given position in society. While in Britain as a student, Patel did not realise that racial and caste oppression have commonalities. Ambedkar, by comparison, grasped that point when he studied in the US and learnt important lessons from the struggles of black people. Ambedkar developed an anti-caste consciousness, Patel never saw beyond an anti-British one. He never understood Ambedkar’s point that independence without caste emancipation would only mean a change from British to Brahmin and Bania masters.

Patel accepted Gandhi as his guru and never came to think for himself. His mind never stretched beyond the Gandhian framework of feudal democracy, of gramraj and Ramraj. Maybe Patel thought that the Shudras might become rulers in that gramraj, but he was fooled. He did not see the other side of Gandhi – his reliance on Bania industrialists such as the Birlas and Goenkas even while he spoke of a return to village economy. The Bania industrialists were the real power Gandhi was working for, and their power over the country today is part of Gandhi’s legacy.

Patel’s apathy reflected the Shudra predicament: denied equal rights yet still positioned somewhere in the middle of the caste order. The Dalits, at the very bottom, are ready to take on the dominant castes that oppress them. The Shudras have been resigned to their limited privileges, even if these come with limited lives. They have never been angry at the Brahmins and Banias above them. Instead, they have let the Brahmins and Banias convince them that the threat comes from the Dalits, and so direct anger at them. Shudras have never realised their own unequal status in the Hindu religion and all the socio-political consequences of it.

Patel’s lack of intellectual production has become the bottleneck for his history and power, just as it has always been the bottleneck for Shudra history and power. Patel had no socioeconomic theory of his own. He represented the Shudras without a representative ideology. He did not give the Shudras any theory or ideology to show them the way to their empowerment. Shudras are still facing that same ideological hole today. Just a statue of Patel, no matter how big, will never be able to fill it.

So now Modi, who as I said in my recent essay for The Caravan, is a Bania, taking orders from his guru Mohan Bhagwat, the Brahmin sarsanghchalak of the RSS, will unveil a statue of the Shudra Patel. Even here, the BJP and RSS have excluded Shudras from the most important roles. Let us wait and see what this Bania-Brahmin rule brings to the nation and the Shudras, apart from a giant statue.

Kancha Ilaiah Shepherd is a political theorist and chairman of T-MASS.