Right-wing forces are mobilising women against women’s right to spiritual equality in Hinduism.

Despite their sharp differences, one thing that unites radical Hindu men and Muslim male fundamentalists is their opposition to gender equality within their respective communities.

The Supreme Court order allowing women of all ages to enter Lord Ayyappa’s Sabarimala Temple is being opposed by the right-wing forces just as Muslim fundamentalist organisations didn’t agree with the striking down of instant triple talaq.

What is absolutely ironical is that the RSS/BJP, along with the Shiv Sena, has been mobilising women against women’s right to spiritual equality in Hinduism.

Radical Hindu men, just like their fundamentalist Muslim counterparts in India and the world over, believe that a woman’s body is impure because of her menstrual cycle. They, however, feel a man and his body is absolutely pure and spiritually superior. Hence, men of all ages can go to all temples, but women are not allowed to enjoy that equality. The Supreme Court has thrown open the doors of Sabarimala Temple to women of all age groups.  (Photo: PTI file)

The radical Muslim men also believe in imposing purity-related restrictions on women. Added to that is the burden of burqa culture to avoid arousing impure thoughts in men. They believe that a woman’s body should be zealously guarded from men.

The radical Hindu men are doing exactly the same thing. The RSS is quite open about it now and I am glad it has finally shed the cloak.

The notion of men’s ‘prerogative’ to divorce a woman in a manner he likes and chooses is still treated by many Muslim men as a divine right. But the Hindu men from radical Hindu organisations believed that the Muslim women must be liberated and the BJP-led NDA government at the Centre supported that “cause” before the Supreme Court.

And once the instant triple talaq judgment was out, the BJP government enacted a law abolishing the same. But the same BJP government opposed the entry of Hindu women (of menstruating age) into the Ayyappa temple.

Does that mean the RSS/BJP want freedom and equality for Muslim women, but are opposed to Hindu women enjoying equal rights as men?

The issue of women’s equality following the Sabarimala judgment is, quite understandably, being seen as a ‘leftist’ verdict.

Kerala Chief Minister Pinarayi Vijayan is being targeted for his resolve to implement the SC verdict. 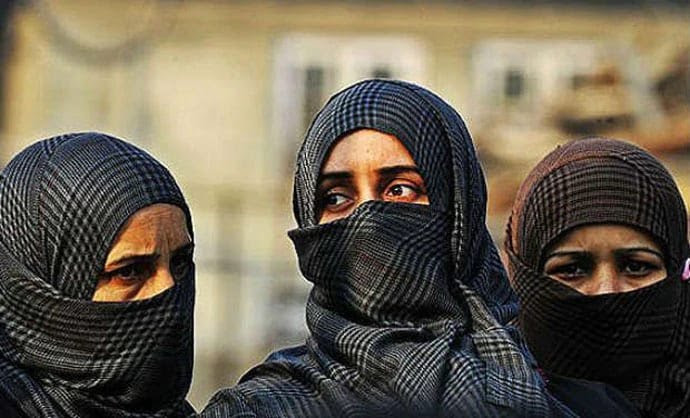 Why men feel a woman’s body should be zealously guarded from men. (Credit: PTI file)

While the Congress leadership in Delhi is trying to play safe, in Kerala, it is supporting the most imprudent Shudra approach by the Nair Service Society (the most cruel Shudra patriarchal society that supported Sambandham marriages for a long time in history). The NSS, with the tacit support of the Congress, is mobilising the Nair women against themselves. Nair women were forced to live as concubines of youngest Brahmin sons for centuries. Now, they do not want the women to visit a temple in Kerala.

The Nair men implement all Brahminical rules against their own women. They have no sense of self-respect. Whatever was written as temple code by Brahmin spiritual theoreticians, these Nair men are happily implementing that.

According to the Agama Shastras (written by Brahmins), Shudras, including Nairs, don’t have the right to priesthood. The same pundits wrote that women should not enter temples and the Nairs want to implement it at their own cost.

← Why Modi government is for sansyasis, not farmers
From a Shepherd Boy to an Intellectual →