The RSS mode of targeting Muslims as the permanent enemy, and Owaisi’s attempts to organise Muslims electorally, may lead to a national disorientation and gradual disaster. 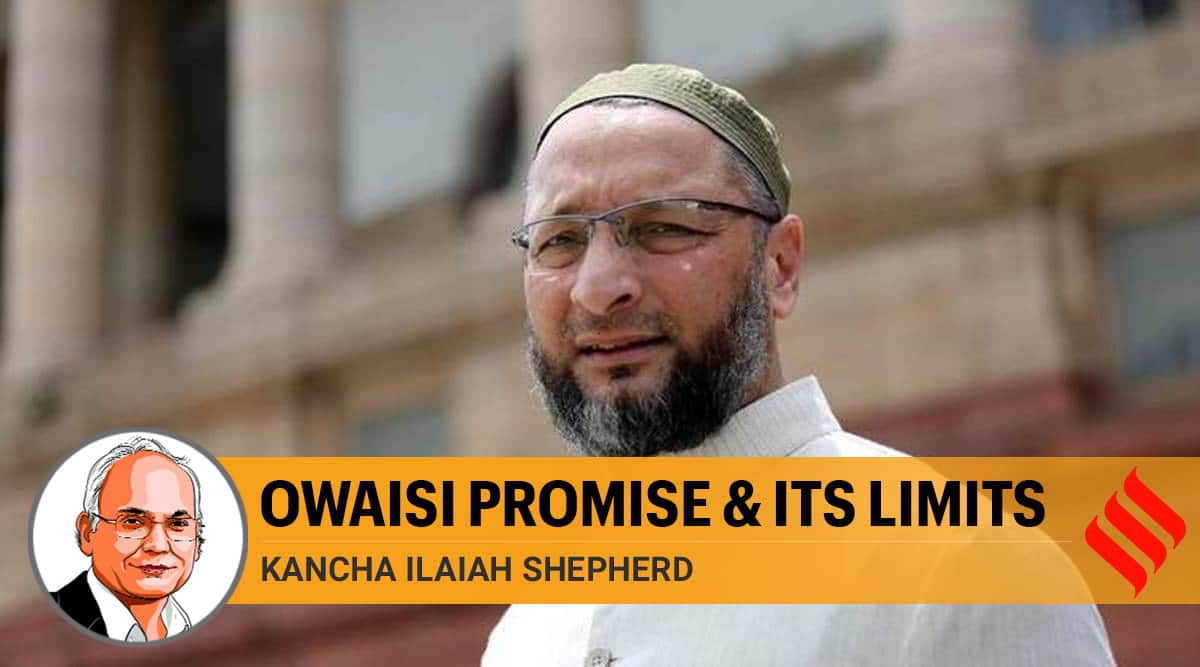 The All India Majlis-E-Ittehadul Muslimeen (AIMIM) leader Asaduddin Owaisi is poised to become a national leader of the Muslim community. Apart from Hyderabad, his electoral base has now spread to Maharashtra and Bihar, where the AIMIM has won both assembly and municipal seats. In the 2019 Lok Sabha elections, AIMIM won a seat in Maharashtra, apart from Hyderabad. The rise of AIMIM is in the backdrop of the RSS and the BJP’s politics, which has been steadily isolating the Muslim community in India. According to the 2011 census, Muslims constitute 14.2 per cent of the Indian population. In certain urban pockets, AIMIM could win seats on its own, if the Muslims vote as a bloc.

Asaduddin’s father, Salahuddin Owaisi (1931-2008), was also an MP, representing Hyderabad constituency, but he was not a modern Muslim leader with a national image. But Asaduddin Owaisi is educated in England, and trained as a barrister, with a deep conviction that democracy is a necessary political system for Muslim well-being in India. He broke away from the UPA in 2012, which gave a boost to his national ambitions. It also turned him into a Muslim face that the BJP/RSS has constantly attacked and targetted.AIMIM’s spread has serious implications for the BJP and Congress. His success in carving out a Muslim constituency will benefit the BJP and bleed the Congress. If Muslims move away from the Congress, the BJP’s winning possibilities in every state will increase. Some of the regional parties like the Samajwadi Party and the RJD also stand to lose. So Owaisi’s rise as a visibly Muslim leader is as much BJP’s need as the AIMIM’s.

However, this may have another implication for Muslim life in India. Since a large chunk of the Muslim populace is concentrated in urban areas, their political organisational mobilities will increase and a religious-ideological leadership will emerge. By and large, Muslim masses are also unhappy with secularism, which traps them in a majority-minority discourse in which their Muslim identity is lost.The old slogan of SC/ST/OBC minority unity is also likely to go for a toss now. Though he talks about Dalit-Muslim unity, Owaisi has no language to address the Shudras or OBCs. The RSS-BJP combine wants to expand their base in a state like Telangana by militantly opposing Owaisi. They made inroads in the Hyderabad city by mainly mobilising OBCs against Muslims, as is clear in the recent municipal elections — a politics that they will now take to rural Telangana. Since AIMIM has a history of asking for an independent Nizam state (what they called South Pakistan during Kasim Razvi’s Razakar movement in the 1940s), Hindutva forces conveniently labelled the old city as Pakistan and Owaisi its Jinnah.

In many cities with a significant Muslim population, as in Hyderabad, the Shudra/OBC population have no intimate relations with Muslims. The OBCs are meat-eaters, but many do not consume beef. The RSS/BJP networks want to use these differences and organise Shudra/OBC masses against Muslims. Owaisi’s entry into caste language is recent and his more militant brother treats all OBCs as Hindus.

In fact, no Muslim leader and intellectual has studied the fault line of caste adequately. Their focus has always been the Hindu-Muslim divide. Their understanding of caste contradictions is limited to Alberuni’s Al-Hind. But India has had too long a history of caste oppression from the days of the Vedic civilisation, which predated the beginning of Muslim rule in the 11th century.

The Hindutva nationalism forged by RSS-BJP has challenged the idea of secularism, under which Muslim leaders had a place. Under Owaisi, the AIMIM, too, speaks a Muslim nationalist language. Since Owaisi’s ancestors refused to leave Hyderabad for Pakistan, the AIMIM leaders use their Indian-Muslim nationalism as a weapon against the BJP-RSS’s attempt to brand Muslims as foreign or Pakistani. That is also why Muslims across India may gravitate towards him. But the RSS mode of targeting Muslims as the permanent enemy, and Owaisi’s attempts to organise Muslims electorally, may lead to a national disorientation and gradual disaster.

This article first appeared in the print edition on December 14, 2020 under the title ‘Owaisi Promise & Its Limits’. The author is a political theorist, with an upcoming new book The Shudras — Vision for a New Path co-edited with Karthik Raja Karuppusamy (Penguin)

← The Shudra Civilization
How Long Do Shudras Have to Continue Endorsing Insults? →