Why Walls Around Gujarat Model Of Development? 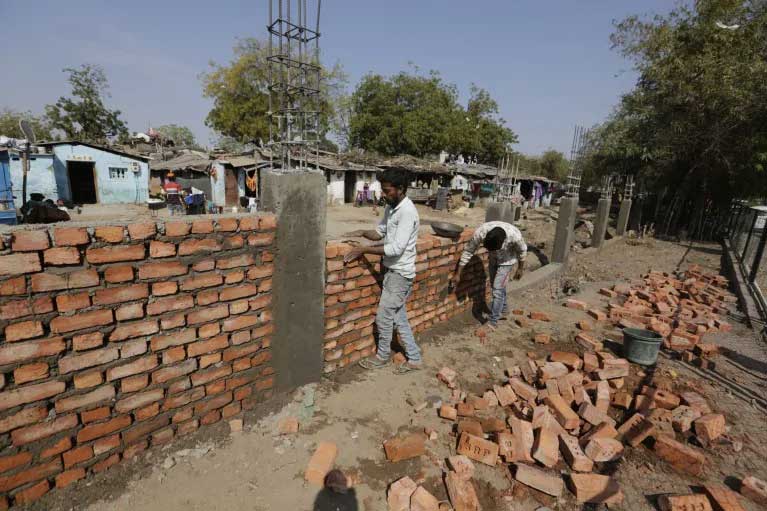 Assume that Donald Trump is coming to address ‘Namasthe Trump’ meeting in Hyderabad or Vishkhapatnam or Bangaluru or to Chennai or Cochin there would not have been a need for building walls around the slums on the way to Airport or to his hotel or to the stadium where he addresses the meeting. But in Ahamedabad there is such a need because the way to any big hotel or to the stadium, there are full of slums which not only look very poor but stink very badly. Hence the PM Modi wanted walls to be built to cover up the Gujarat model of poverty and slum life. Slum life tells the story of development as the Slumdog Millionaire did.

This raises a more fundamental question: what was the kind of Gujarat development model he built for 12 years as Chief Minister and later his hand picked Chief Ministers? By no stretch of imagination Ahamedabad would match the capital cities of South Indian states. This being the reality, it would be interesting to take a note how the national media bought this propaganda and the RSS/BJP launched this campaign before and during 2014 elections and how the people in other North Indian states including South Indian Karnataka believed it and voted for that model. This only tells the story of ‘media myth’ making.

No doubt Gujarat has more number of top industries and many of them supported Modi and the BJP due to their displeasure with the Congress, which ruled for 10 years before 2014 elections. The Congress also got caught in corruption and the family control issues. The Gujarat industrialists at that time were visualizing a future for their economy to grow unchecked under the BJP rule. Some of the present Government supporters got more wealth than they could imagine. But the economy is in a bad shape now and many industries are in deep crisis. But how does the Modi Government and ruling party at Delhi justify the fact that walls are being built to cover up poverty from the gaze of not just Trump but from the gaze of the global media. It is true that media is now coming to its senses even in India.

Both Gujarat Government, the Centre under the leadership of Modi could not give a two bedroom house to those Ahmedabad slum dwellers as some of the South Indian states did. The most industrialized state of India could not do away stinking poverty in the capital city even with the benevolence of rich industrialists like Ambanis and Adanis who control massive wealth of the country. Anyway they do not share their wealth with the poor of India. There is no such moral and ethical commitment on their part. The Hindutva ethic does not demand that.

Gujarat stood at 22nd rank among Indian states in the Human Development Index for 2018. Yet the state which was show cased as the model for development just six years back also housed massive wealth by the rich of that state. This conundrum is getting exposed now.

Hence RSS/BJP which allowed Modi to show case that state seem to have realized that the nation does not believe that development model anymore and hence the communal card with CAA/NRC is deployed. But this agenda has invited more foreign criticism as the UN General Secretary himself said that the Muslims of India might remain stateless. This is a serious assessment of the UN. The whole nation should be concerned about this image of India among the comity of nations, which we are a part.

But the world today is rejecting such agendas because the largest democracy and the oldest democracy cannot engage with religious and communal cards in their hands. As India is slipping into theocratic discourse , America under Trump is pushing its democracy out of the boundaries of secular notions. Though Trump and Modi won their elections with America First and India First slogans but America under Trump changed the nation’s unemployment graph. America’s unemployment rate is 50 years low and India’s unemployment rate 40 years high under Modi.

Though Trump promised to build walls across the nation’s borders to check illegal migration he could not really start building such walls because of strong opposition from Democrats . The opposition to Trump is so strong that he was impeached in the Congress but escaped losing power in the Senate just by margin of six votes.

But Modi is building walls around slums to hide the stinking poverty in the nation yet there is no serious opposition. Any critic of Modi’s Government or party is being dubbed as anti-national. What does this nationalism indicate?

In the midst of so much nationalist euphoria why such slum life of people remains as it is? Anyone who travels across North India where the BJP got highest seats poverty and misery could be seen everywhere. This is not true of South India where the BJP cannot make much headway. Anyone who travels across South India would find much better living conditions, health levels and housing conditions. South India also accommodates social diversity much better.

What is the nationalist morality? Reducing inequalities and exploitation should be the primary goal of nationalist party and leader. Why there is no focus on that fundamental issue of improving the life of productive masses?

Building walls around poor people’s living localities does not improve our image internationally. It exposes the weakness not strength.

On the one hand the Prime Minister talks about India reaching 5 Trillion dollar economy from the present 3 trillion dollar economy. On the other he builds walls to hide poverty. Wealth cannot be produced from mythological sources. Masses have to work and produce wealth. The chief source of wealth is labour of masses. Their food intake, living conditions that include housing and educational facilities have to be good. There is no evidence that this central Government is working to improve them in a focused manner.

The focus is on other issues that do not improve the living conditions of the poor slum dwellers and villagers. Trump comes and goes but the walls that are being built in Ahamedabad to hide the stinking poverty of Gujarati working people will remain to tell the story of Modi Government both in Gujarat and Delhi for long time to come

Kancha Ilaiah Shepherd is a political theorist, social activist and author of many books, the latest being From Shepherd Boy to an Intellectual—My Memoirs.

← Are OBCs Not Eligible To Be On Sri Ram Temple Trust?
Ambedkar’s Warnings About Three Types of Dictatorships →