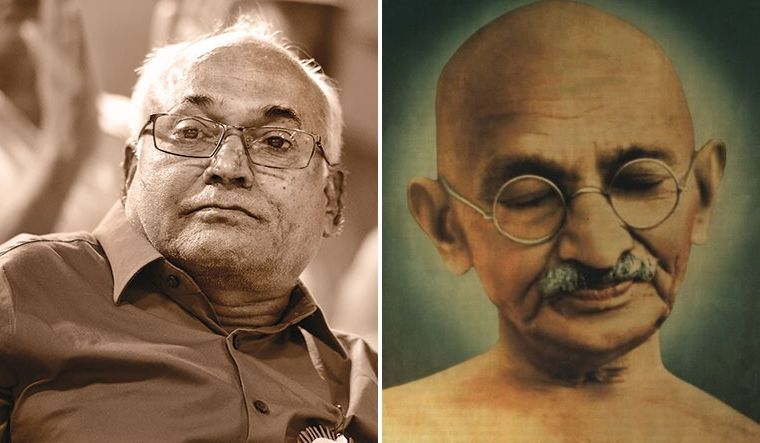 How do we assess Mahatma Gandhi on the occasion of his 150th birth anniversary? The BJP, which never had very high opinion of him, has given a call to celebrate his birth anniversary with such fanfare as if he was a BJP man. Since Gandhi alone is known across the world after Gautama Buddha, Narendra Modi uses him to project himself almost as his inheritor. Modi’s love for him, apart from being the most popular leader of India in the world, flows from the fact that he is a Gujarati Baniya. Modi has shown his love for Gujarati Sardar Vallabai Patel by building the tallest statue. The UN celebrations on September 25, when he was in New York show he will use his international stature to his full advantage.

I would like to assess Gandhi’s role, however, from a mass point of view. Gandhi’s image has been built at two levels. One, his work and ideology as a top national leader in the freedom struggle; second his brutal murder by Nathuram Godse, who belonged to the same Hindutva ideology 71 years ago. What did his life, ideology and subsequently murder because of which he got a massive martyrdom icon hood, do for the dalit/shudra/OBCs of India? Not much. On some of the key fronts, his ideology hindered human equality and development, and the most affected are dalits and adivasis.

ALSO READ: The unknown Gandhi: The extraordinary journey from Mohandas to Mahatma

Let us imagine the dalit/shudra/OBC and adivasi situation if Ambedkar was not there as a strong spiritual, moral, political and legal supporter of productive masses in the backdrop of Gandhi’s support to ‘Varnadharma’ and ‘Ramrajya’ civil society and state. The idea of reservation would not have taken roots as Gandhi was totally opposed to that idea. Imagine if Nehru, as a Kashmiri Brahmin, did not support and be part of multi-cuisine food culture—including beef and pork—in opposition to Gandhi’s food ideologies.

Gandhi defined Hinduism as a vegetarian religion and India a vegetarian nation. He took up a massive campaign for vegetarian food culture. He did not accept cow-related murders. It is astonishing to know that as a mass leader, he did not realise that more than 60 per cent of Indian food consists of meat and fish. The whole food culture of shudra/dalit/adivasis, leave alone Muslims and Christian minorities, in his times comprised of meat and fish. Gandhi did not see all that as Indian. The present food culture-related lynchings of human beings have roots in this Gandhian Hindu-India vegetarian nationalism.

Gandhi’s role as a freedom fighter was outside the state structure. He tried to build moralist nationalism with non-capitalist village centred economy. But that kind of economy does not exist in any country in the world. Fortunately for us, Nehru took the capitalist welfare economic route with sugar-coated socialist model called democratic socialism.

Gandhi asked for abolition of the Congress party after independence. Now, the BJP uses that opinion of Gandhi to dismantle the Congress party. Imagine if the Congress was not there to establish a constitutional democracy after independence, India would not have remained even this kind of democracy. Nehru realised that as a civil societal leader Gandhi played a great role but he would not have played a good role as administrator. Hence, from the beginning he carefully operated against the Gandhian ideals. Hence, Indian democracy survived.

So long as uncritical Gandhians remained strong in India, Ambedkar’s image did not get serious public attention. By the 1990s, the hegemony of the Gandhians in society, state and other public institutions got weakened. With implementation of the Mandal Commission Report, Ambedkar came to the central stage of our socio-political discourses. This impacted all structures including the BJP/RSS and hence Narendra Modi who claimed an OBC status could become the Prime Minister. Otherwise if it were to be strong Gandhian civil society, an OBC would not have been allowed to become the PM.

After 71 years of Gandhi’s death, he has become more closer to the BJP because of many pro-Hindutva ideological positions. Secondly the Baniya monopoly industrial capital which is supporting the BJP—particularly Modi and Amit Shah—would promote his traditional Hindu ideals more and more. His global presence will also increase as the monopoly capitalists are willing to spend on propaganda on Gandhi. For all the crony capitalists, he will become a moral and internationally acceptable personality.

Since he is known for his theory and practice of non-violence many global organisations accept him as an icon. However, within India, for many of us who came from the dalit background and are convinced with Ambedkarism as an authentic Indian ideology and philosophy, Gandhian theory of Ramrajya and vegetarianism will go against the very constitutional values.

Since the weakened Congress cannot stop the BJP/RSS from using Gandhi to their advantage, the Ambedkarites and the left intellectuals must critique his ideology and practice from the present predicament of the nation.