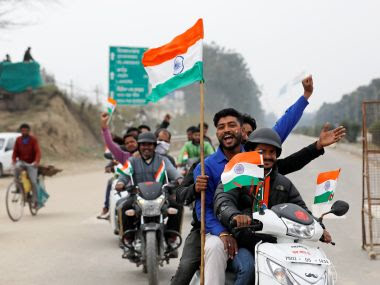 An oped published in The New York Times warned about possible nuclear war between India and Pakistan had a picture of India and Pakistan warheads clashing. The Indian bomb has a three-colour flag with an Ashok Chakra. The Pakistan flag has a green flag with crescent moon and a star.

But, imagine if the Indian flag was in saffron colour with a Swastik, and the two bombs were to represent Hinduism and Islam, but not two states. If that were so, any war between these two nations would have always been a religious war. Our founding fathers, with a great vision, avoided that disaster.

India and Pakistan so far have fought three wars — 1965, 1971 and 1999. In all these wars, Pakistan wished that instead of India and Pakistan, the war would be between Islam versus Hindu. But the Indian State did not allow that. It struck to its secular three colour multi-culturalism and Ashok Chakra of peace.

India and Pakistan so far have fought three wars — 1965, 1971 and 1999. In all these wars, Pakistan wished that instead of India and Pakistan, the war would be between Islam versus Hindu. But the Indian State did not allow that. Reuters

From the Indian side, the wars were fought with a belief in peace and the rulers were conscious and disallowed the religious jingoism to creep into the decision-making process and into the fighting forces. The Rashtriya Swayamsevak Sangh (RSS) and the Bharatiya Janata Party (BJP), sitting in the Opposition, were craving for their turn while, treating the Congress, which was in power at the time of two wars (1965 and 1971), as the ‘Muslim appeasement party of weak nerve’.

Now, Narendra Modi and Mohan Bhagwat are in control of the system and they believe in theory of ‘teach a lesson to Muslims’. They have an ideology that is both understood and misunderstood by Muslims.

Earlier, Pakistan fought every war with a religious fervor. India did not allow any war to turn into a religious one. The Kargil war would have turned into, but the coalitional character of the Atal Bihari Vajpayee government did not allow that.

If the present tension (after 14 February Pulwama attack) was escalated into a full war, the nuclear capabilities of both, India and Pakistan, would have been one of the major threats. On both sides, the ruling elite being of religious jingoism is another threat to both the countries. If the war is perceived to be a religious war, it would be worse than clash of the two neighbouring nations in the East.

Pakistan harbours terrorism. It uses Kashmir as a convenient ploy of creating a crisis to dislocate India’s economic advancement. The BJP-RSS, on the other hand, have got enough anti-Muslim ideology with lynch politics, cow nationalism and food cultural jingoism. This approach of the ruling forces alienated Kashmiris even more.

Hindutva cultural training of its cadre is meant to be anti-Muslim. When one dislikes their dress code, food habits, prayer timings, governing such people with empathy becomes impossible. This is going to be a serious problem in handling Kashmir problem by any Hindutva leader. When the rulers do not like the people based on their religious moorings there is no give and take attitude left between them.

The NYT editorial pleads for the intervention of America into the Kashmir issue more seriously. This is not acceptable to us, anyway. Violation of human rights in the Valley has drawn more global attention now than ever before because of the social media.

The Organisation of Islamic Co-operation in spite of External Affairs Minister Sushma Swaraj’s appeal passed a resolution treating Kashmir as ‘India-Occupied-Kashmir’. It was not an organisation of “Islamic-Hindu Co-operation”. Even to go by the Hindutva advice.

If BJP and the RSS want to organise an ‘Organisation of Hindu Cooperation’ against the OIC, the only Hindu Nepal declared itself a secular nation after it became communist democratic state. It has better relations with China than India which is ruled by a Hindutva party. The BJP-RSS did not expect this kind of change in a Hindu theocratic state.

Though terrorism is serious problem since the 9/11 attacks, the global forces have been attacking India repeatedly. India handled terrorism with lot of caution all these years. After the 9/11 attack, the American response to Iraq created more problems for the US than solving them. Hence, George W Bush does not have very respectable status in the US, let alone the world.

Modi and RSS have a track record of being anti-Muslim and not just anti-Pakistan. The NYT article refers to Modi’s aggressive Hindu nationalist campaign to win the 2019 election, a perception that has already been noticed by the world.

Even if the BJP wins this election, the Hindutva approach will gradually distance Kashmir from India. The OIC will also see the Kashmir issue as part of the Islamic world issue. What does it mean to the economic development of India? What kind of impact would that have on the educational and health improvement of India? The India masses do not fully know these implications.

If a war breaks between India and Pakistan, it certainly may not end like earlier wars. Both countries will risk the life of those are born and living and also those who are yet to be born.

The author is a political theorist and social activist

Firstpost is now on WhatsApp. For the latest analysis, commentary and news updates, sign up for our WhatsApp services. Just go to Firstpost.com/Whatsapp and hit the Subscribe button.

← RSS’ vegetarian army, in times of conflict with Pakistan and China
2019 Lok Sabha Polls: Why Rahul and Priyanka Gandhi must promise English-medium school education in the Congress manifesto →