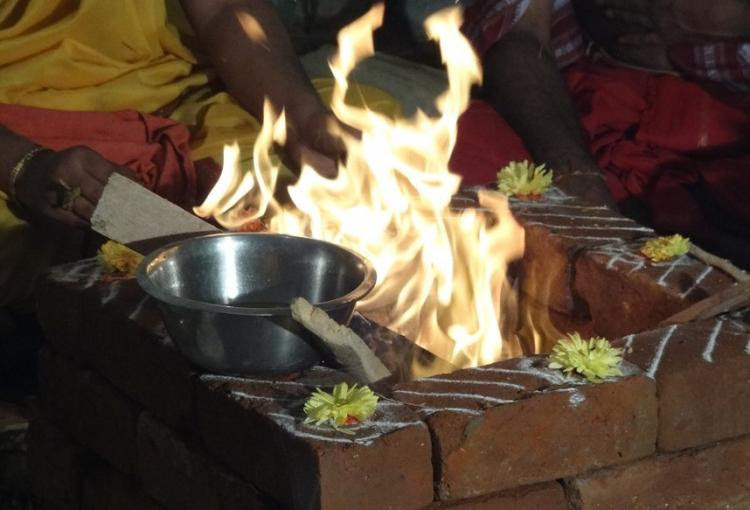 After the Bharatiya Janatha Party came to power and ruled the nation for two terms from 1999-2004 and 2014 to present a lot of propaganda by the Brahminic pundits belonging to that ideology clamour that all modern sciences, originated in Europe, America and China and Japan is no match to the Vedic science that the ancient Brahminism has built. Particularly after the Narendra Modi came to power all the Science Congresses have turned into Vedic Science congresses . They started propagating that all the colleges and universities must teach only Vedic science instead of teaching the universal science discovered in many countries over a period of millennia. They do not want to recognize the agrarian science that the Shudra/OBC/Dalit/Adivasi masses of India have discovered for millennia too.

It is, now, very clear that all the four Vedas were written during the period of pastoral economy after the Harappan economy was destroyed and before the Buddhist economy was built. The villages and cities were completely erased after the Indo-Aryans settled down. By then the Indo-Africans who later came to be known as Indo-Dravidians were enslaved to do the basic cattle rearing and sustaining of the pastoral economy. It is clear that the food production using animals—buffalo, cow, bull, sheep, goat and so on— was built by the Vedic Shudras. But they were not allowed to take any decision for advancing that economy that could lead to rebuilding of villages and cities. The Vedic Brahmins were the main decision makers. The Ksatriyas were assigned the work of defending and protecting the hegemony of Brahmins and the Vaisyas were assigned the work of distribution of the cattle economic products. The Brahmins could get the highest share of that pastoral economy for consumption and spiritual sacrifices.

Horse was the only other animal that the Aryans brought with them and used for mainly for war by Ksatriyas with a specialization. They were under the guidance of Brahmins who composed the Vedas. Once the Brahmin spiritual hegemony got established all other forces, including the non-Brahmin Aryans were under the Brahminic control. It was during this period that they established the psychological control over the rest of the communities—both Shudras non-Shudras.

The saints who were said to have composed or written the Vedas began to survive with the Shudra slave labour based on cattle economy. They did not teach them their spiritual knowledge. As there were no village communities, after the Harappan society was destroyed , mostly the pastoral life was of roaming cattle herders and saints who were living in the forests mostly under the trees or in the caves looking for self-salvation. That is the reason why even today a typical Hindu (mainly Brahmin) saint’s image in the school text books is that he is a lonely man sitting semi-naked under a tree or in a cave for self salvation. He is never seen amidst people teaching divine ethics or religious morals. It is here that the roots of Brahminic isolationist castesist Hunduism got struck into the Indian soil.

The Brahmin saints never believed in the community salvation. The Shudras were not treated as human beings. Though such Shudra socioeconomic slavery does not exist now, the culture of Shudra spiritual slavery continues to operate in the 21 century. Hence the Brahmin priest or saint remains away from the rest of the communities and the Shudras cannot lead the Hindu spiritual system. The Shudras including Marathas, Jats, Patdars, Gujjars, Kammas, Reddys, Nairs and so on are not even conscious of this spiritual non-existence. As their spiritual illiteracy and ignorance is long drawn out, from Rigvedic period to present, they have not acquired any philosophical strength to assert themselves. The modern philosophy is more associated with religious thought, though materialist and secular thought co-exists with it. For a long time in human history the Shudras were not allowed to enter into the world of reading and writing of text—religious or secular. This actually caused a huge loss for human knowledge of the world. One of the major productive human societies was kept out of positive philosophical discourses. Hence the poverty of philosophy among the Shudras continues even today. The Brahmin saints and priests did this quite deliberately and systematically starting from the Vedic period.

The Brahmin saints in the Vedic period were either celibate or having sexual relations with women only occasionally without accepting the marriage system that could have, perhaps, existed in Harappan civilization. Even the family culture was taken backward by the Vedic brahminism. They did not construct a spiritual theory of moral family life of one wife and one husband as happened in other religious spiritual books . The Shudras must have carried the Harappan man-woman relations with them into the Vedic period where some kind of marriage system existed among them. However, the Brahmanic sainst have not evolved any positive marriage system. This is very clear from all Purana writings of the same saints.

They did not recognize the female sainthood. No woman was allowed to construct a spiritual texts also. That is the reason why the first Indian text written by women is Therigatha of the Buddhist women only after 6th century BC.

The very nature of pastoral economy was that the cattle herders were roaming or travelling along with cattle for grazing without having any scope for settlement. Pastoral economy in nature and character was unsettled economy with a food resource that was centered around meat and milk. The Brahmin saints were living in the forests either engaged with one another among themselves or sitting alone in the dhyana and mantra pattana (reciting of Vedamantras) activity.

Agni, Vayu, or Brahma must have been their gods of worship and of offering sacrifices. They slowly seem to have left Indra to his textual existence. The sainthood that they constructed during the pastoral economy was by and large anti-people and self survivalist and without any interaction with the laborers. The animal economy also needed lot of hard work of grazing, taking care of young ones, keeping a watch of wild animals that attack the domesticated animals like buffalo, cow, sheep, goat and so on. No saint was involved in this work. Even the animal economic activity was treated as impure and un-brahminic by the saints. They, thus, systematically cut their relationship with physical economic activity. The purity and pollution relations in different forms were established.

The saints in other religions like Buddhism or Catholic Christianity from early days were working among the masses. Teaching the ignorant was their main job. They lived in the villages and towns. As there were no villages and cities in the pastoral economy the Brahmin saints in that period became so self centered and exclusionary that they stopped all forms of social interaction with the Shudras. Any encounter with an unknown human being was scary and sinful for the saints. It was here that human untouchability was constructed. The saints became so anti-labour that the cattle herding Shudras were treated as totally untouchable.

Only in 19-20th centuries, during the Bhakati movement ,the Shudra touchability, leaving only the Dalits as untouchable, started. The Shudra Bhakti Movement was given recognition in the face of large scale Shudra conversion to Islam in Afghanistan, Pakistan and East Bengal (present Bangaldesh). Till then all Shudras, including the present Marathas, Patidars, Jats, Gujjars, Reddys, Kammas, Nairs, Lingayats and so on were also treated as untouchable to Braahmins. In Food (dining) and Bed (marriage) related issues untouchability is practiced even now with the same Vedic fervor by the Brahmins pundits and saints. No Shudra community is in a position to challenge this kind of spiritual and social untouchability. The RSS/BJP are also not opposing that practice. They justify it as social practice with Indian sentiments.

The varna and caste system seems to have been constructed like that in the Vedic period. That had huge implications to the economy of the ancient and modern India. Two major spiritual systems that the Vedic Brahminism created did not allow any surplus generation in that period. Without surplus generation no good village and town system could survive. Actually religion should have played a positive organizational role for generating surplus and distributing that surplus among various working forces. But the Vedic Brhamnism chose a negative role of social fragmentation and anti-communitarian life. This practice of the spiritual intellectuals did not allow emergence of advanced village system and its development into urbanization.

This whole process played an anti-science role. Science can develop only in the social collectivity and with involvement of in hard physical and mental labour of the people. The educated teachers of the society both spiritual and secular play a critical role in the process. The self isolationism of Brahmin saints only negated that process of surplus generation. The Vedic pastoralist period is a good example of long drawn out socioeconomic stagnation of a big nation like India. Till the Buddhist school emerged this stagnation continued.

What are those two anti-surplus generation mechanisms that the Vedic Brhaminism deployed?

One was the wastage of milk products in the fire and in other rituals. The second was massive animal sacrifices that they indulged in. The Yagnas, Yagas, Kratus were perfomed by sacrificing hundreds and thousands of cattle—cows, bulls, buffaloes, sheep, goats and so on. In yagnas or yagas like Rajasuya, Aswamedha thousands of cattle were killed at one go. The dead animals were thrown in the open space where they rotted polluting the environment. The animal sacrifice was a norm in all religions in ancient times. Only Buddhism completely avoided such animal sacrifice. Catholic Christianity and Islam practiced the animal sacrifice in various forms. Islam continues such large number of animal sacrifice on Bakrid day, which has its negative impact on the modern Islamic economy.

Though the Brahmin priests gave up this practice after the Buddhist spiritual revolution, Shudra/Dalit/Adivasi people still continues animal sacrifice even today in a limited way. Except for pure food purpose no animal should be killed and that was what Gauthama Buddha also propagated. Pure vegetarianism is also anti-developmental.

In Nepal there is still a practice of mass animal sacrifice with a Brahminic priestly class involvement. Such animal sacrifice without proper use for food purpose of human beings certainly negates economic development of any society at any given point of time. The Vedic period was full of unwanted sacrifices and that negated its economic advancement.

Now the Brahminic forces and the BJP/RSS live a vegetarian life but even within that vegetarianism food wasting through fire poojas and homam performances is allowed.

Throwing mainly ghee that was being produced in plenty in the pastoral economy came into brahminic life and it continues till now. Of all the milk products only ghee gets burnt in the fire. The other products like milk, curd would only put out the fire. But milk and curd they used for washing the idols ( what is known as milk wash) and leaving lot of curd (now with mixed rice) before idols as naivedhyam (godly food) to Godheads. Most of the ghee was either consumed by the Brahmins or poured in the fire rituals leaving hardly any milk products—particularly ghee– for the Shudra slaves and other Aryan Varnas like Ksatriyas and Vaisyas. However, the kshatriyas seems to have asserted their right to better food and better status as they were handling the horse power and war weapons.

The ghee consuming culture of Brahmins on daily basis continues even today along with pouring ghee in the Agni while performing fire rituals. Among the Shudras, Other Backward Classes and Dalits who actually produce ghee by grazing cattle the consumption of ghee is minimal. Hence the hard working people lived only for short period and the saints lived for long time.

If the BJP and RSS want that ancient Hindu literature to be taught as science and social science to the Shudra upper castes like Marathas, Patidars, Jats, Gujjars, that are fighting for reservation this will only help to restore the Vedic slavery.