The Sarsanghchalak’s handbook is not Ambedkar’s Constitution, but Arthashastra.

By Kancha Ilaiah Shepherd,
Source Daily O
Kautilya lived in India and wrote his treatise Arthashastra in the third century BC. Niccolò Machiavelli lived in 16th century AD in Italy and wrote his book The Prince. Arthashastra, though an economic title, is actually about statecraft, with a preamble to preserve Varnadharma (the fourfold caste order, with the Brahmin at the top and the Shudra at the bottom). It was written to preserve Hindu Dharma in ancient India, but its influence has remained on the subcontinent’s statecraft, except during the Muslim and colonial rule.
However, it gained more prominence after Independence. It has been a book of study for the Rashtriya Swayamsevak Sangh’s (RSS’) political and religious strategists ever since the organisation’s inception in 1925. Its strategy of maintaining statecraft is threefold — political, religious and cultural. It propounds the political art of controlling state power through Hindu spiritual politics. Nehru, by all means, was secular, but not Machiavellian.

The Prince, on the other hand, was written by Machiavelli to separate politics from religion. It was meant to liberate the European kings from the clutches of the spiritual control of the papacy. It is the initiator of the theory of the secular state: it separates the state’s day-to-day functions from religious control. But both Arthashastra and The Prince advocate the “end justifies means” theory and combining the methods of “Lion and Fox” for achieving the ultimate goal.

In independent India, Mohan Bhagwat is the most successful Kautilyan — and Indira Gandhi has been the most successful Machiavellian in both the Congress party and governance. The real ruler (whatever his caste; in ancient times, it was mostly the Kshatriyas, and today, it is Narendra Modi, a Bania OBC) does not handle full power, it is the Brahmin guru (Kautilya himself was a Brahmin guru) who calls the shots from behind.

In contrast, in The Prince, there is no guru to the king. In fact, the Pope was that guru for every king and Machiavelli aimed to finish that invisible guru’s hand in power play. The tactic succeeded in Europe and hence, secular states came into being. 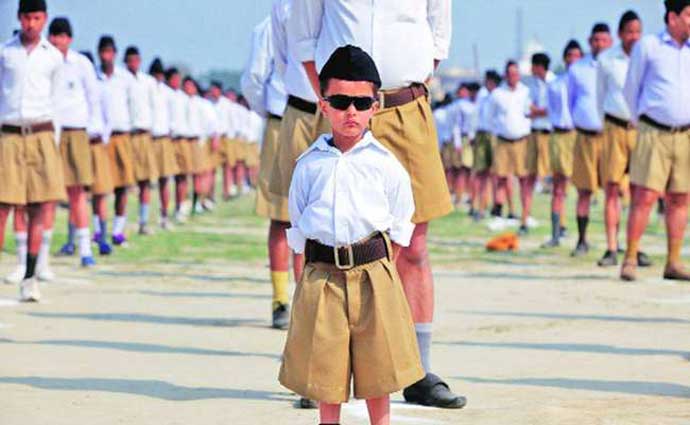 If the RSS rule continues, the democratic morals of India’s citizens will collapse. Photo: Screengrab and PTI

The RSS ideologically worked out a strategy that it should develop a system that continues the crucial role of the politically manipulative spiritual guru even in the democratic setup by negating the theory of separation of state and religion by systemically using the Kautilyan model with the Sarsanghchalak position. Within the RSS, the latter plays the role of Kautilya today while the Bharatiya Janata Party, the Sangh’s political wing, rules the state.

After the 2014 general election, though Narendra Modi (a Bania OBC) became the visible ruler — he is also a demagogic orator and vote puller for the unorganised masses — real decision making power has remained in the hands of Mohan Bhagwat (a Chitpawan Brahmin most eligible for that position, according to Hindu Dharma).

During the Atal Bihari Vajpayee regime, this Kautilyan role of the then Sarsanghchalak was not necessary as the prime minister was self-sufficient, though he was not a vote puller. Secondly, in the coalitional system, the guru’s role of invisible hand was not very critical. Hence, in the Vajpayee period — one dominated by alliances — Kautilya was dormant, and very much in the background. Now that there is full majority for the BJP, the guru is playing the role of re-uniting state and religion in India, which had been separated during the British rule — and largely remained so till 2014.

This union will pose massive implications for the survival of democracy and the secular state in India. Though Indira Gandhi was secular in her designs, without a guru or invisible hand throughout her political career, she achieved her ends. Emergency was its final product.

The Karnataka drama was played out by Mohan Bhagwat by invoking the Kautilyan principle of “end justifies the means”. Operationalising this principle in the state was the goal of the RSS, the invisible hand. BJP’s CM candidate here was BS Yeddyurappa, known as a corrupt Shudra and if he were to become the chief minister, he would have worked according to the direction of the guru.

Crimes like lynching over beef eating, and attacking secular and liberal intellectuals are part of the Kautilyan statecraft. Kautilya was very clear, like Machiavelli, that once you assess the enemy, you must eliminate him/her by all means. Rationalist MM Kalburgi and journalist Gauri Lankesh were murdered in exactly this fashion. Many well-known intellectuals from Karnataka continue to live with police protection.

The Congress’ Machiavellianism began with Indira Gandhi dismissing the Left front government of Kerala in 1959, starting with her initiative as the party president, much against the views of her father and former prime minister of India, Jawaharlal Nehru. Nehru, by all means, was secular, but not Machiavellian. But during her time, Indira Gandhi continued the practice of “end justifies means” and was a victim of the practice.

Though she was secular in her designs, without a guru or invisible hand throughout her political career, she achieved her ends. Emergency was its final product.

Like the Machiavellian prince, she did everything on her own, without any underhand figure directing her. Since it was one-person regime, the state found a way out. What is more, when the invisible guru does everything and the real ruler pretends to not know (as Narendra Modi does) what is going on, the danger to the secular state and society is deeper.

The Congress never had such a structure. The PM in the Congress rule is the prince himself! Manmohan Singh was the only exception to that rule — he was the PM, but without influence. He was a ruling economist. During his 10-year stint, no state government was dismissed unceremoniously; no genuine majority party or coalition was stopped from governing the state.

Of course, that was because Sonia Gandhi — as Congress president — was no Indira Gandhi. Though she was born Italian, she has never been Machiavellian in her approach.

Machiavelli’s prince was progressive for his times. To reiterate, separating the state from the religion was his ultimate objective. It did good to the world’s welfare democratic system. The Kautilyan gurudom is its anti-thesis. Its end is to dismantle the democratic secular state and take India exactly on the lines of Pakistan, where the modern Mullahs rule.

The Hindu guru and the Islamic Mullah have no differences when it comes to theocratising the state.

If the RSS rule continues, the democratic morals of India’s citizens will collapse. The guru’s handbook is not Ambedkar’s Constitution, but Arthashastra. The RSS opposes not only Machiavelli the Italian but also Rousseau, the French thinker.

In their Kautilyan scheme, they are also opposed to democracy as an un-Indian system. If they come to power in 2019, they will move stridently towards their foremost objective — the abolition of India’s election system.