Dr. Kancha Ilaiah Shepherd, a political theorist and Dalit Rights activist has been in the eye of the storm ever since the Telugu translation of his book Post Hindu India came out. In one of the chapters of the book, he alleges that the Arya-Vysya community are social smugglers and have usurped the wealth that should have actually belonged to lower caste people. In this piece Ilaiah shares how he has been courting controversy and dealing with threats to his life. 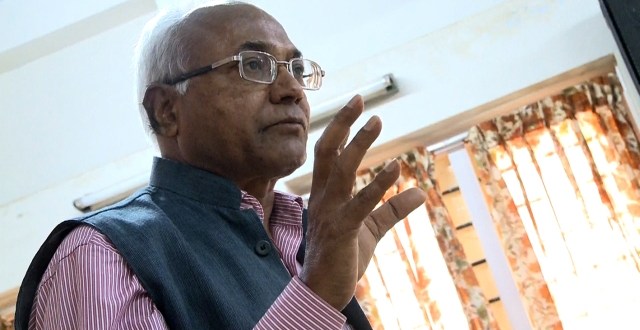 The Sangh Parivar elements that worked hand in glove with Arya Vysyas, who wanted to lynch me at Parkal on September 23, after the TDP Parliament member T.G Venkatesh issued a threat on September 17, have shown their true colours. They caught hold of a 22 year old Dalit boy, sporting a big saffron tilak on his forehead. This boy said, “Kancha Ilaiah is dog! He criticized Hindu Dalits by writing Smajika Smugglerlu: Komatollu’’. They got case registered against me for atrocities against SC/STs. The media including the Business Standard felt this is a rare case of SC/ST atrocity so far registered. But this is yet another type of lynch-mob politics. They have filed several cases in several different places against me. As I have utmost respect for judiciary I am willing to go through the judicial processes.

I have fought the RSS, ABVP network in Osmania University and outside for thirty five years and now they think, they have a chance to lynch me in one form or the other. These forces never fight for the rights of Dalits/Adivasis/OBCs but whenever the Baniyas or Brahmins are in trouble they deploy all their forces including SC/ST/OBCs. Even the OBC/SC/STs are not allowed to go to the support of their own communities, whenever they face atrocities and humiliation. But their upper caste members—mainly the Brahmin-Bania members rush to the aid of any so called spiritual force, or cow related issues or in defense of their own upper caste networks. They do every possible thing to defame any Dalit-bahujan intellectual writing on Indian history, the labour related issues, wages, atrocities and so on. But they would never speak about increasing the agrarian wages, protecting the farmers from suicides.

They accuse all such defenders as Left and Anti-national. The defenders of rich, religious gurus (whatever could be their role in the society), they rush to their defense and proclaim that is nationalist act. So their nation constitutes the rich people, big business forces, religious gurus (whose contribution to production is zero) and cows. They never treat buffalo as Indian animal at all! I need to be lynched because I stand by the SC/ST/OBCs, buffaloes, soldiers serving on the borders and lowest rung of the police force, who again come from the lowest castes and communities. Anybody who speaks of human rights is anti-national. This is bizarre democracy they are running from Delhi now.

After they failed at Parkal, they think this atrocity case would kill me on my own ground, as I wrote extensively about Dalitisation of the Indian society as a process of de-casting and de-classing of it. I strongly defended their beef food culture (in the recent cow centered vegetarian campaign of the Hindutva). This only shows that they stoop down to any level to protect their funding Vysya coffers. My ‘Buffalo Nationalism’ has put them in fix, as it keeps on fighting their ‘Cow Nationalism’ politics.

The Two Dramas
When the Bharatiya Janta Party came to power 2014, it started enacting two dramas on the national stage. These elaborate charades, related to defense and glorification of India internationally, were aimed at ensuring the the BJP’s survival by showcasing them as the most nationalist party. Their approach was two pronged; they used cow protection — the so called Gaumata of the nation, and Yoga – the nation’s source of health and power, to further their own agenda.

Around these two dramas, it deployed its upper caste leisure centered Rastriya Swayamsevak Sangh activists and retired officials from cozy jobs mainly coming from non-agrarian social background. More than all these forces the whole Peethadhipathi, Sadhu Sanyasi, yogi network, which mainly comes from the non-agrarian caste cultural, and non-productive backgrounds are deployed, to attack anybody who talks about cow as economic animal.

Even Prime Minster Narendra Modi also must have sold tea in his childhood but, never grazed cattle in the fields. Selling tea is also a business activity not a productive activity, like grazing cattle, tilling land, pottery, carpentry… manufacturing a plough to till or forging a wheel for transport. Mohan Bhagawat and Amit Shah have much less to do with grazing cows, leave alone buffaloes. Yet all of them made the cow protection, not cow grazing, as the national legal problem causing huge problem of food, employment, and law and order.

The question of yoga is a much more serious issue. Though Ramdev, a Yadav by birth, made it a big method of health protection among the middle class. The brahmnic thinkers, who never got involved in tilling the land or grazing the cattle, and supposed to be the authors of all funny theories, projected Yoga as the most useful nation saving body exercise. The BJP owned it as if that is the most suitable exercise for armed forces that need to fight mighty powers like China in the East and not so powerful Pakistan in the West.

The sports like running, high jump, long jump, the body exercise by working the productive fields have no TV shows. Their existence is now seen as anti-national. But the most serious question is should army recruitment adopt Yoga that is being promoted by the Prime Minister, his entire Government and the Sangh Parivar all over the nation as the measure of selection. Should police institution also adopt that sport, as a daily exercise to maintain their body?

National Icons
The great Sadguru who constructs an imaginary Yoga Guru (of black Shiva image) got it inaugurated by the PM. But they never talk about the first ever Indian city builder called Harappa (which name resembles the popular cattle grazer God called Beerappa about whom there is narrative in my book Why I am Not a Hindu) as great Indian. It was during Harappa period that the division of labour took place. Different sections of the Harappa society specialized in different things of city building. Brick making, carpentry, pot making, animal grazing, canal constructing, tank bund making, road laying and so on. It is this ancient labour centred Indian that would be an iconic model. But not an imaginary Yogi, who sits like dead stone in Coimbatore that would be a iconic model for developing nation.

The BJP does not have interest in projecting dignity of labour, peasant economic hard work, the labouring masses as the essence of Indian being. Instead they project un-productive saint as the sole symbol of nation. The worst is that they hate those who talk about production, people’s philosophy of equality. They hang around mythological texts as essence of the nation. But to me the nation lives in the labour of people, which the BJP never wants celebrate.

The farmers and other productive mass of India have seen the two dramas—the drama of Cow and Yoga—that the BJP has been playing as just onlookers. Alongside these two dramas the more serious actions of De-monitization and GST imposition are having telling impact on their life. Let us wait and see how it unfolds in future.

(The author is Member, T-MASS, an organization that works for social Justice, dignity of labour and English education in Government schools in Telangana)