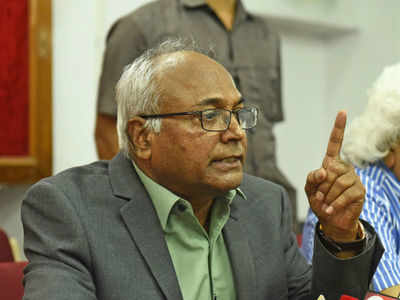 Social scientist Kancha Ilaiah Shepherd has been facing heat from the arya vysyas, who have taken offence at his analysis of the community as ‘social smugglers’. After reprints of his book were circulated, a TDP politician called for Ilaiah to be hanged, effigies of him were burnt, protesters have urinated on his photograph, and he has been threatened on the streets.

The state, he says, has not offered any protection. In an interview to Amulya Gopalakrishnan, he explains his position

Could you explain what you meant by ‘social smuggling’? How does casteinteract with economic exploitation?

The notion of social smuggling, which I coined in my book Post-Hindu India, is meant to capture the idea of cultural and economic exploitation. From the post-Gupta period onwards, one caste controlled business. The banias or vysyas alone had that right, as per the Manusmriti, and as decreed by the Gupta rulers.

Smuggling is a process of illegally taking away goods and commodities or wealth out of a nation’s borders. Social smuggling, as I define it, draws wealth, grain, goods and commodities from all the productive (agrarian and artisanal) lower castes, into the boundaries of the bania caste. The bania business often involves deceptive mechanisms while buying and selling, which is called dandekottuta in Telugu. The lower the caste, the higher the level of exploitation by the shahukars at the village level. At higher levels, non-banias are either not allowed to enter business, or not allowed to survive in it. Bania social relations with others were/are very negative, without any element of “moral sentiments”, as Adam Smith would describe it. This is what leads to massive poverty among the lower castes and massive wealth in the hands of bania business and industry.

In ancient and medieval times, it took the shape of guptha dhana. Now, it has led to the massive accumulation of billionaires without any social responsibility. A 2012 study of corporate boards in India shows that vysyas make up 46% and brahmins 44.6%. Shudras, including all OBCs are a mere 3.8%, and SC-STs are 3.5%. The population of banias is so small, how do they control such a large share, right from the village grain market to the top industries? And okay, there is no problem if you have historical control, but what is your moral relationship with the rest of the productive market? There is no responsibility towards farmers and foot soldiers. Forget the sham of corporate social responsibility, there is no sense of social or national obligation. People keep asking the Modi government and state governments for jobs, but when they privatise everything, how can they give jobs? Why can’t the private sector give some jobs to lower castes, or create a fund? I have said I am willing to modify the book if these demands are met.

Instead, for taking these academic positions, I have been targeted by arya vysyas in two states, not in seminar rooms but on the streets. Their MP has issued a fatwa against me, and I have been attacked.

Why are some parties reacting so strongly to your book now?

The value of a piece of scholarship can’t be judged by politicians in press conferences or by angry members of a community, but by other scholars. If there is indeed a dispute, it should be settled by the courts.

So your analysis is a description of social conditions, rather than a claim about the essence of any person or group?

What I suggest is that caste is also an economic category that has material effects on living standards, and is not merely a social category.

Your view of free speech in India today?

In the ancient and medieval period, there was no right to speech for dalits and shudra castes. Now, they may have some space to talk freely about class, but not about caste. The moment one talks about caste exploitation, one becomes suspect. I have experienced this deeply. They say my methodology is suspect, my English is suspect, my academic morality is suspect. I am losing hope in democracy and constitutionally guaranteed free speech. That is the reason I am living in self-imposed house arrest. Nobody has to protect me after my death.

Was this always the case, or is there a new climate of intimidation?

Absolutely, it is on a new scale. Our food habits are now in danger — tell me, what will the lower-caste soldier fighting China at the border eat, if not beef? Journalists like Gauri Lankesh have been killed for speaking freely. My books have been in the market for a long time. Earlier, there was some space for disagreement. Now, it is fatwas and threats of violence, even from arya vysyas who claim to be peace-loving people and share a heritage with Mahatma Gandhi.